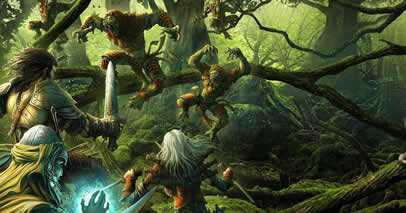 Wrath of the Righteous 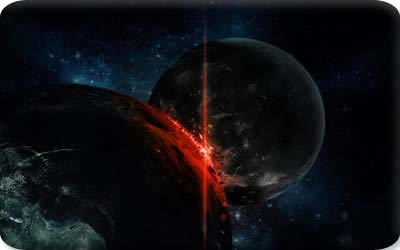 Our brave group of young adventurers has set sail aboard the Jenivere from various northern ports to explore the jungles of Sargava and the Mwangi Expanse in search of the Well of Eternity.

Quinn, an apprentice alchemist has promised riches beyond imagination to entice them into a 3,400 mile journey just to reach the capital port of Eleder.

After months at sea and a harrowing pass along the Eye of Abendego, the Jenivere was impaled and split in half upon the sharp rocks of the notorious island know as Smuggler's Shiv. Most of the crew has been lost but miraculously our group of land-lovers ended up unconscious on the sandy shores of the tropical island, saved by forces unknown.

As the days went by, the strange mysteries and dangers of Smuggler's Shiv make it abundantly clear that the castaways are not welcome on this hostile island but the greatest threat might have washed ashore with them.

Captain Alizandru "Kove" Kovack and his First Mate Alton Devers accompanied by the mysterious Varisian scholar named Ieana appear to have designed the Jenivere's violent end and the death of its crew.

After standing against the restless spirits and treacherous denizens of the inland including a tribe of vicious cannibals the saboteurs' plot begins to revel itself.

Following the trail of the Captain the adventures discover a hidden Azlanti temple to Zura which provides clues to the legendary Saventh-Yhi, a fabled city said to be hidden somewhere in the depths of the Mwangi Expanse.

Could this be the location of the Well of Eternity? Quinn is determined to find out.

After defeating the Red Mountain Devil and exploring the hidden Temple of Blood, our explorers learned the secret of the Tide Stone which allowed them to intimidate the natives into submission or at least an uneasy standoff. Although they were not true natives as the Thrunefang tribe was actually descended from the original crew of the Thrune's Fang ship which was marooned when the Age of Lost Omens began and Sargava was cut off as its mother country Cheliax fell into civil war some 70 years ago.

Without the cannibal tribes interference the survivors were able to use the abandon lighthouse to signal the Red Gull, a passing merchant ship. After some tense negotiation a deal was struck and Captain Aulek Tegerten agreed to provide rescue and passage to the capital city of Eleder.

All's well that ends well, well at least for our adventures and fellow castaways Aerys Mavato and Gelik Aberwhinge. The same cannot be said for Ishirou, Jask Derindi, Sasha Nevah and the crew of the the Jenivere who were all shanked by the deadly Smuggler's Shiv.

A GATHERING OF SCAVENGERS

Having escaped Smuggler's Shiv, our motley crew of survivors land in Eleder, where word of their discovery on the island quickly leaks out.

Many rival factions seek to find the fabled city of Saventh-Yhi and the race is on with our adventurers throwing their lot in with the Pathfinder Society after introductions by Gelik Aberwhinge . Aerys Mavato joins the Free Captains expedition. While Caption Kove and his First Mate along with the scholar Ieana align with the Red Mantis cult of assassins.

With information gleamed by Quinn from Yarzoth's notes and the guidance of an enigmatic scout named Nkechi, the adventurers set out on their journey.

It is clear forces are working against the group as they become caught up in a Freeman's revolt before every even leaving Eleder. After killing the local leader of the Freeman's Brotherhood, a violent revolutionary and anti-slavery freedom fighter, the group leads their expedition into the dangers of the Sargava wild.

Following the fastest route to Kalabuto the caravan travels overland through the wild scrublands and savanna, along the older trade routes that skirt between the Bandu Hills and the Laughing Jungle to the edge of the M'neri Plains, at which point they break from the trail and head west to Kalabuto.

With some guidance earned from the savagely beautiful barbarian named Athyra and her raptor companion Jaji, the caravan cuts days off their trip with a daring plunge through the haunted Fzumi Salt Mine.

They arrive in Kalabuto to find the town holding prisoner a group of outlanders called the "Torn" who have arrived mysteriously through rifts that have been torn across dimensions causing transport from an alien world.

Although the Torn seem to be normal people, the local magistrate and royal advisor, Minlock, has labeled them cursed and order his daughter Mindy to imprison the otherworldly "invaders" for the safety of the town.

At the urging of a Torn named Caden, a member of a supposedly legendary group of heroes called the 88, our own group of outlanders decides to free the imprisoned Torn earning the gratitude of Caden and the wrath of the local authorities and Minlock.

Once resupplied with the aid of a brawny dwarf named Cheiton, our outlaws make a hasty exit from Kalabuto followed the Upper Korir River north into the Screaming Jungle.

Following the rivers rocky falls and churning rapids the caravan heads north with a wary eye to the east and the savage cannibal tribes that inhabit the Screaming Jungle on the far side of the river.

After narrowly surviving an encounter with a shadow demon that had possessed a brutish ape, our group of explores forge forward only to find themselves running head long into death at the hands of a jungle necromancer.

With little defense against the arcane might of the flying caster, Rose falls to his foul magic and herself is turned into a undead monster which forces our band the gristly task of cut down their own fallen comrade.

With the aid of a "civilized" native guide named Thorn our group escapes the repressive howl of the Screaming Jungle and enters the seductive calm of the Bandu Hills. Calm does not mean safe though as the entire group nearly falls victim to a beautiful demon masquerading as a spirit dancer along with her charmed harem.

The ruins of Tazion stand as a remnant of a forgotten age, an outpost of ancient Azlant lost in the southern Mwangi Jungle. Centuries of weathering and erosion have transformed the once-splendid architecture into little more than scattered stones, curious topography, and fetid tar pits. Few suspect that the ruins possess the key to finding the lost city of Saventh-Yhi.

A tribe of ape-men known as charau-ka now inhabit the ruins, though they are uninterested in whatever secrets may still be hidden there. Under the guidance of their mad priest Raogru and his serpentfolk ally Issilar, the charau-ka have broken from their traditional demon-worship and embraced the path of the serpent-god Ydersius.

After overcoming the perils of Tazion including the competing Red Mantis faction, the adventures finally discover the Pillar of Light, the secret to finding the lost city of Saventh-Yhi only to learn that four gemstones are required to activate the four pillars before the location of Saventh-Yhi will be revealed.

While searching for the gemstone "keys" the caravan discovers a treasure far greater than gold, eternal youth!

The very reason that Quinn organized this expedition in the first place is discovered, the Well of Eternity. As the water of the well cannot be transported without losing its magic and fearing that it cannot be protected from the Red Mantis, it is decided that the water should be used up immediately. Many in the expedition are blessed with renewed vigor and eternal youth while a few partake too much from the well and are utterly destroyed by its power.

Quinn theorizes the well is not a well in the traditional sense and is not the source of the wondrous elixir but a focusing device that is used to infuse cosmic energy into the contents of a receptacle sphere. While the receptacle was emptied by members of the caravan it could be refilled by water from the Fountain of Life which is said to reside in Saventh-Yhi.

With renewed vigor and purpose the four gemstones are found and the Pillar of Light is activate revealing the location of the lost city of Saventh-Yhi. The quest for the Fountain of Life has begun.

With the magical shroud lifted by the Pillar of Light, the lost city of Saventh-Yhi is found!

The city is immense though and will take considerable time to explore. The city is divided into districts with the first district discovered being controlled by an aggressive, highly territorial tribe of charau-ka -- baboonlike humanoids who worship Angazhan, the demon lord of apes and jungles.

The charau-ka are currently led by a powerful being named Olujimi, an intelligent, four-armed ape and one of the angazhani. Olujimi is a vicious and cruel general that leads him charau-ka army with an iron fist forcing all of his kind to fight and die at his command.

After a hard fought battle Grugonoth is defeated but it is learned that he has sworn vengeance on an even more powerful foe named the Radiant Muse that had defeated him in the past and still controls parts of the lost city.

Our heroes cautiously continue to explore the ruins of the lost city of Saventh-Yhi ever on the lookout for a creature even more powerful than the defeated Grugonoth, a battle from which they barely survived...